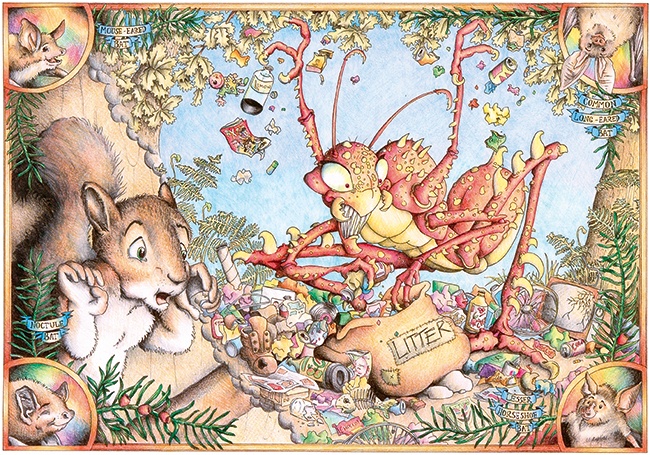 t’s been a busy few days with three very different school visits. On Tuesday I was at Orchard Infant School with their Reception classes. I love Reception, largely because they’re a little bit off-the-wall as they’re still settling into the rhythms of school life. The topic was Once Upon A Time and so I was asked to help them create a new storybook character that they could then take further during the coming weeks. After reading them one of my stories and discussing what made one of the characters heroic I settled down with each class to create their character by inviting the children to suggest a characteristic, item of clothing or prop. It makes for a tricky drawing because you don’t know what the next child is going to suggest, but the results are always rather satisfying. Cherries went for a blue-skinned female pirate called Pirate Polly Petals who rescued children from dragons; Apples went for the somewhat surreal three-eyed, four-armed, cheetah-legged, top-hat wearing Fantastic Fast Franky who raced around the world stopping arguments and helping children get along; while Pears went for Magical Megan Merlion who had the tail of a dolphin, the body of an elephant, a lion’s mane and a mermaid’s face who protected sailors from stormy weather. All elements and ideas suggested by the Reception children - great fun.

On Wednesday I was with Year 2 at Wildground Infant School who have been looking at the themes in my New Forest Friends children’s books. In New Forest Friends & The Litterbugs, Hatchet the Squirrel imagines a litterbug to be a giant insect made up from the parts of other creepy-crawlies, so after reading the story I asked the children to suggest different animals so I could draw a new litterbug from the various animal parts. Once this had got their imaginations fizzing they were then challenged to write a description of their very own litterbug packed full of interesting describing words (it’s always good to hear Year 2 children using words like humungous). The afternoon session had the children tackling some creative writing where they needed to tell a tale either from their own point of view, Beaulieu the Hedgehog’s, or even their newly created litterbug's. Especially pleased to see two of the boys, who I was told found any form of writing a struggle, really get into the flow of story writing, with one of them completing an entire page and then going away to type it all up, print it out, fold it into a booklet AND add an illustration! That was incredibly pleasing to be part of.

The last school visit of the week was Ranvilles Junior School in Fareham. Last year I created a pair of cartoon children for the school and illustrated them as if they were in each of the four year groups with the idea being that as the children move up in the school the characters grow up and move with them. The children have been using them within their topic work, and I was being asked to go in and expand upon what each class had been discussing by drawing some additional cartoons that the children could copy at the same time. Year 3 were thinking about what the parents of the two children might do for a living so I was asked to draw a Naval Officer (a third of the children’s parents in the school have a Navy connection) and a Museum guide. Year 4 wanted to tie the children into the school’s values, so we drew the boy determined to defend a goal that was too large for him and the girl persevering with the early stages of learning to ice skate. Incidentally, the children have been voting on names for the cartoon pair, with the results being announced today, hence a lack of nomenclature so far). In the afternoon, Year 5 wanted the pair on-board a cruise ship as part of a narrative they’d been creating. They described the boy as a gamer and a bit careless, while the girl enjoyed reading and was more mature and relaxed, so we drew the boy desperately reaching for his dropped hand-held device as it plummeted over the railings of the ship while the girl looked on over the top of her book with a raised eyebrow. Finally, Year 6 were looking at the deeper aspects of their personalities and wanted to show the boy being pressurised by his friends into spraying some graffiti, which we drew with him looking extremely nervous about, while with the girl they had decided that she had issues with occasional bullying and so needed to be shown doing something positive and triumphing over adversity, so we had her posed on the winner’s podium at the end of the school sports day.

All three days involved me having to draw off-the-cuff large scale cartoons without any prior knowledge as to what they might be, and as far as Ranvilles Juniors were concerned, this also meant keeping them simple enough for the children to copy at each step too. When I’m working in the studio I have the opportunity to plan out a drawing, sketch in pencil or digitally, and make amendments before committing a more deliberate line, so it can be quite a challenge when so many eyes are watching to go straight to a bold marker pen, especially when you’re under time pressures too. Fortunately, the children are always immensely positive and excited about seeing live cartooning, and their enthusiasm and subsequent work are testament to how powerful and engaging the process is.

Finally, I should mention that both Val Anne Lee, who wrote On The Banks Of Hatchet Pond, and Martin Bradley, who wrote and illustrated Top Gun Of The Sky (published by Ceratopia Books) are also available for school visits. Val is an immensely talented writer of witty and fun poems, while Martin has a passion for wildlife, particularly birds, and even more particularly birds of prey. If you’d be interested booking them, or would like them to come along with me to a school visit, please do get in touch. I should also mention that all the children’s books mentioned above are available from the Ceratopia Books shop, Amazon, and New Forest shops and attractions.