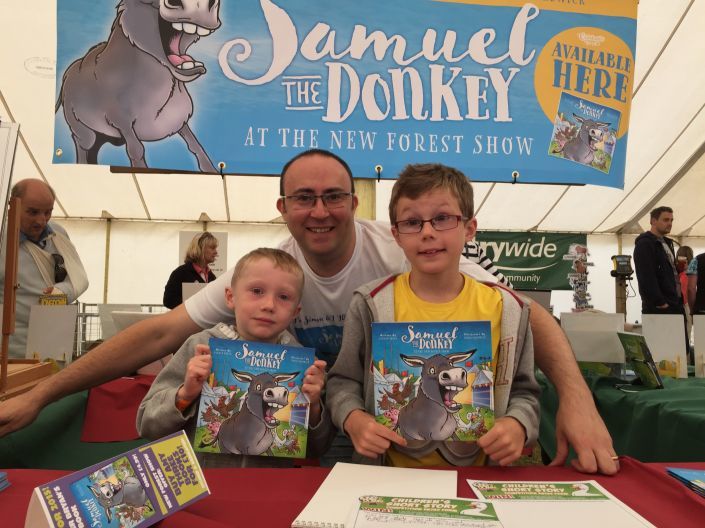 So the big deal at the centre of the Longdown Activity Farm tent at the 2015 New Forest Show was the launch of a new book, written by Farmer Bryan and illustrated by me. It's called Samuel the Donkey at the New Forest Show and tells the story of Samuel's rather noisy exploits from past shows, a vocal talent which was often in evidence throughout the show, and certainly didn't harm book sales much. The bonus was that if you bought the book, you could also get in with Samuel and have your photo taken with him, something that proved extremely popular.

The two boys in the photograph with me are Alex and James, from Bradford, who've been coming to the New Forest Show for the past four years and always make a bee-line for the Longdown tent so they can have a cartoon drawing from me, and they're always good enough to buy my latest books. And they're not the only familiar faces, so it makes all the preparation and effort worthwhile when families such as Alex and James seem to enjoy it so much.

If you'd like your copy of Samuel the Donkey, please visit my shop, Longdown Activity Farm, or from your chosen bookshop.