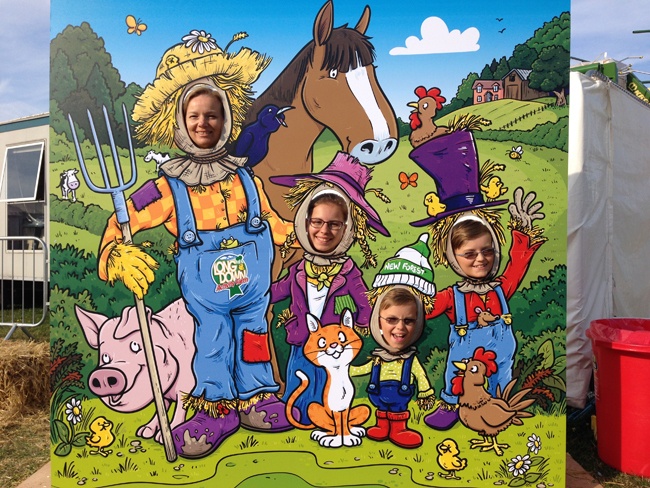 Much busier day at the show on the final day, with cooler temperatures and a lot more children. Consequently I was kept busy drawing dozens upon dozens of cartoon animals (including: dolphin, unicorn, meerkat, mouse, goat, elephant, hedgehog, eagle and flamingo, but mostly rabbits, ponies, dogs and cats). There was less spare time to draw a big illustration, so although I started a farmyard scene I didn't complete it, but I had a good excuse.

Book sales were very good too. Best seller at the show was still New Forest Friends & The Litterbugs, with three young mums stopping to say how much they'd enjoyed it when they were little (eek!), and then buying it, and other books, for their children. Second biggest seller was On The Banks Of Hatchet Pond, written by Val Anne Lee, and there were lots of kind comments from people who already owned it and those that were discovering it for the first time. Farmer Bryan's book Charley's Day On The Farm did well too, and I even managed to sell some of Martin Bradley's Top Gun Of The Sky and Dusk Until Dawn books, despite me just being the publisher on those and Martin not being present. His Dusk Until Dawn book, about barn owls, was particularly well received. It was nice also that so many people called by who'd bought books in previous years to see if anything else was new. All the books, by the way, are available on my online shop, at New Forest shops, and on Amazon.

On Saturday 9th August 2014 I'll be at the Ellingham Show, near Ringwood, in the Craft Tent, so if you didn't make the New Forest Show do come and say hello there.