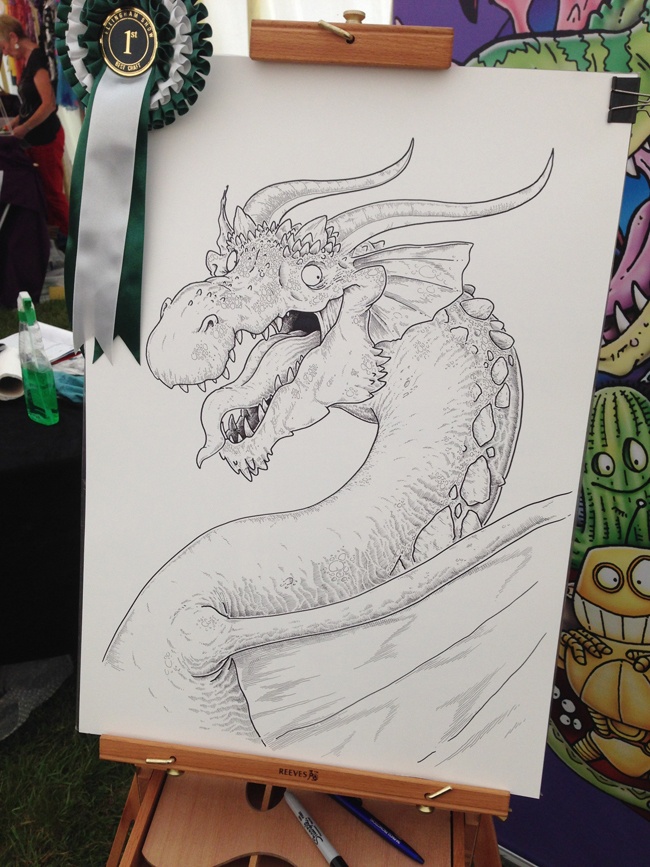 In The Craft Tent At The Ellingham Show 2014

The Ellingham Show takes place a few weeks after the much larger New Forest Show, but is in itself a great show with plenty to see and experience, set in the grounds of Somerley Park just beyond the New Forest boundary. It's a popular show so I thought I'd give the craft tent a whirl with my children's books, but up until last week I was stuck on the waiting list until a phone call confirmed we'd nabbed a place. Ably assisted by Alice, my daughter, we set up a rather spiffingly colourful stand in our allocated space, complete with some live drawing (I decided to do another dragon - I'm learning they're very popular with both adults and children) and set about meeting the punters. I'd been in to a couple of schools in the area, so there were three or four shouts throughout the day of "Mummy, that man came into our school!", not to mention the increasingly common comment of "Oh look, I used to love this book when I was little," from an adult. Because of where we were meant my New Forest Friends books and On The Banks Of Hatchet Pond, written by Val Anne Lee, proved very popular throughout the day.

The biggest surprise of the day - winning the best stand in the craft tent! It's a huge tent so there was a lot of competition, but, we were told, our colourful backdrops, live drawing, friendly approach and excellent children's books won the judges over. We spent the rest of the afternoon displaying our silver cup (that we get to keep), certificate and rosette. All in all, a tiring but brilliant day, in which we'll be sure to take in part again.