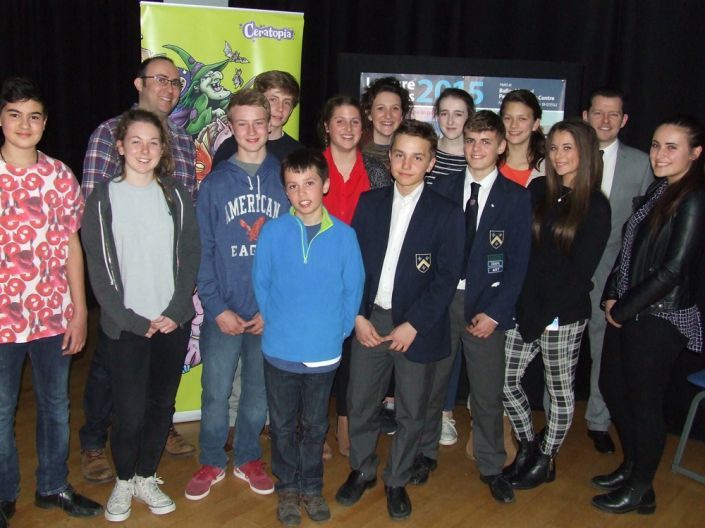 On Thursday 26th March I gave a joint lecture at Ballard School in New Milton alongside the Advertiser & Times. The theme of the lecture was “The Write Opportunities”, and was aimed at giving an insight to pupils from Ballard, Highcliffe, Arnewood and Priestlands schools into the world of journalism, children’s book creation and publishing.

The 2015 Lecture Series had already included talks from Cathy Mussert, who works for the Deputy Prime Minister Nick Clegg, on politics; Judge Sean Enright on the legal profession; Phil Charles, who is the head of the School of Physics & Astronomy at Southampton University; and British composer Christopher Gunning. A further talk by Harry Redknapp takes place in May. The aim is to offer students a chance to learn from people already doing what they might be interested in taking up as a career, so it’s a worthwhile experience for all.

I’d been invited to share the lecture by the Advertiser & Times, so the first half of the talk was given by Advertiser & Times journalist John Waller who explained how he came into the profession, what the highs and lows of the job can entail, and gave some practical advice on writing a news story, including good interview technique.

My task was a little broader, talking about writing picture books for children, how I go about illustrating them, what I think makes a good children’s book, and advice on getting published. I managed to do the entire talk without notes and both halves of the lecture seemed to go down very well indeed, with lots of questions afterwards for both John and I, plus a fair few book sales to boot.

A big thank you to Liza Datlen and the Advertiser & Times for arranging it all, and to the staff at Ballard School for looking after us, not to mention all those that filled out the lecture theatre – students and parents alike.